Well, it challenges the status quo and ensures we carry out a litmus test of the very concept that is being agreed to unanimously.

In practice you do not necessarily need ten people, only the appreciation that someone will challenge the main reasoning amongst the group of individuals. Albeit, to merely play devil’s advocate in deliberating over the main choice that has been agreed upon.

Not to be disloyal, but to ensure that the best reasoning has been applied.

History of the tenth man rule

In 1973, both the Israeli and US intelligence communities had assumed that the Egyptians would not attack or at least not in the short term. Parts shortages and a lack of training in the Egyptian army, according to their sources were the main reasoning. I

It was also Ramadan, the Muslim fasting month, which was also considered another reason that there would be no activity to worry about. Plus, just six years prior, they (the Israelis) had thrashed their adversaries in the Six-Day War. On October 5th, 1973, they were confident.

However, on the 6th October 1973, they were proven wrong.

The Arab countries’ subsequent Yom Kippur war against Israel was a humiliating setback. Following that, there was a ripple effect in Israel: land surrendered to broker peace (the Sinai); political defeat and resignations (including Prime Minister Golda Meir); calls for the dismissal of senior intelligence officials; and, reportedly, the adoption of a new approach to decision-making within Israeli intelligence circles—especially when there appears to be easy consensus.

Hence the birth of the 10th Man Rule being coined to address these and subsequent issues by looking at the strategy currently undertaken and litmus testing it.

The Tenth Man Rule is a method used by Israeli intelligence after they failed to take threats seriously on several occasions. The learning curve is best shown by the Yom Kippur War of 1973. As a result, when they received a bizarre message warning about the undead, a council of ten debated the issue in different ways.

As a blockbuster should, it sounds compelling and dramatic. What, on the other hand, makes this strategy worthwhile of your time? Well, the principle encompasses more than just cinematic effect. The origins of the Tenth Man Rule can be traced back to devil’s advocacy.

If nine of us who get the same information arrived at the same conclusion, it’s the duty of the tenth man to disagree. No matter how improbable it may seem. The tenth man has to start thinking about the assumption that the other nine are wrong.

What is devil’s advocacy?

A devil’s advocate, in common usage, is someone who argues against a generally held or prevailing perspective. If no one else disagrees, it’s usually just for the sake of arguing. It also means that lucifer’s lawyer does not need to be personally persuaded of the opposing viewpoint.

To put it another way, devil’s advocacy is a method of constructing and steel manning a hostile position in order to reveal an idea’s flaws.

Having said that, it appears that the advocateus diaboli requires a specific personality. It’s undoubtedly beneficial to have a predisposition for making uninvited counterarguments that fly in the face of popular opinion. It’s likely that a low level of agreeableness and unpleasant mood is required.

It also appears to me that having a high openness to experience, i.e., a great curiosity in ideas, may be useful in the first place for creating alternative opinions.

As a result, becoming a devil’s advocate involves not only critical thinking abilities, but also the willingness and incentive to perceive and point out the most unpopular side of each issue.

Whatever stance is in favour, the contrarian feels compelled to reject or rebut the argument. It’s a type of inverted thinking that creates a conflict between the individual and the group.

The devil’s advocate is the individual who dares to rise above the group and say what nobody else has thought of or wants to say out loud.

Why is it needed?

There is a need for this as sometimes a group has a collective voice rather than made up of individuals. For example, when it is difficult to reach a decision, the group can have a tendency to follow the first person who makes a choice. Not necessarily the best approach, but one where individuals feel the pressure to confirm rather than contest something.

In reality, lots of brands have failed because no individual was prepared to challenge the status quo.

Brands, like Woolworths, Courts, MFI, Toys R Us, Maplins, Mothercare and more have all employed smart people, yet you need someone or a small group to challenge the normal way of thinking in order to ensure your brand remains agile in an ever-changing economy.

This way then it can always be adapting to market forces and continue to operate and more importantly remain viable.

If some of the brands above had leveraged more changing their normal way of doing business, then there is every chance they would still be on our high streets selling today.

It’s sad to see that sometimes, smart people make dumb decisions and whilst that may not be technically true, it can be hard for professionals that have gained status within their career to suddenly change their decision-making process so radically.

Working within a culture of assuming you are right all the time can be hard to gain the necessary perspective to challenge your way of thinking (normally based on sound marketing principles) and entertain more wild ideas.

For example, GAP closing its 81 profitable stores to operate online only. This is a BIG decision in any company culture and not one to take lightly. Hence victims such as Debenhams and other fashion retailers moving too slowly within their market to accommodate the shift brought about by their target audiences buying clothes online rather than via the traditional ‘bricks and mortar’ approach.

The 10th Man discipline is one where the group intentionally appoints at least one person to serve as the loyal dissenter.

How does it work?

Everybody has the same information, but at least one disagrees with the conclusion drawn from that information. This allows for debate on the already decided topic, which in effect allows you to ensure that the original decision you came to is still valid.

The 10th Man Rule is a strategy for combating our human tendency to favour harmony inside our own circle. When that default tendency towards consensus is combined with a critical decision, as the Israelis have discovered, the effect can be unpleasant.

Have you ever been in a room and felt as though “the train has left the station”.

Everyone seems to be on board with the choice, and you’re just going along for the ride?

The 10th Man discipline is one in which the group designates at least one individual to act as a loyal dissenter. “Loyal” because their ultimate goal is to make the best option for the company.

And, as the dissenter, they not only have the right but also the obligation to disagree and “poke holes” in the group’s assumptions. This strategy forces you to take a step back and reconsider the decision’s wisdom, as well as whether contingency planning or other risk mitigation measures are necessary.

Most of us view the world as more benign than it really is, our own attributes as more favourable than they truly are, and the goals we adopt as more achievable than they are likely to be. We also tend to exaggerate our ability to forecast the future, which fosters overconfidence.

Other factors to consider

However, there is one issue that needs to be addressed. A cynic would argue that no one expects you to think critically unless you do. When the Tenth Man Rule is applied to high-stakes judgments, it must hold up under even the most emotionally charged circumstances.

Consider the equivalent of climate change, immunizations, or gun control in your field. In other words, any concerns that touch on or call into question your most deeply held principles. The advocateus diaboli is speaking for evil personified for a purpose.

At this point it is worth noting that any decision-making should not be paralysed by external disagreement. Therefore, sometimes it will be necessary to ignore the reasoning of one or a few and continue with the main consensus.

Ultimately, this will depend on the nature of the topic being discussed and the urgency of the decision required.

So whilst you will have someone playing devil’s advocate, they must also appreciate there may be a need to concede for the greater good. How many times have you had to make a decision and live the with the best of the worst choices available.

However, this is required sometimes where the urgency to make a decision is required to move things along.

Unfortunately, the power of hindsight is not with us and only in time do we know whether employing the tenth man rule was advantageous or not.

Why every business should employ this principle

Ultimately you are looking for potential flaws in every argument. This form of due diligence ensures you spend enough time to rationalise that the decision you come to is the best possible one and is favoured by the mass.

Whilst it may or may not prove to be advantageous for the business going forward, at least you know that given the information you had at the time, it was the best decision that could be reached at that time with the information provided.

Almost all decisions in business or in your personal life are based on this sound reasoning. You weigh and measure the outcome of each decision that you could choose and then go with what you or the group consider is the best.

The tenth man rule simply ensures you have gone through this process to reach the best outcome and is not intended to be contentious for the sake of it.

Ultimately, the whole point of the tenth man rule is not to ignore the tough questions and reason with the decision that you arrive at. Be that as an individual or as a group.

Only by employing this simple principle can you feel reassured that you carried out your due diligence in reaching the best decision possible.

Preferably, in a substantive, informed and constructive way so as not to alienate yourself from the group, but to provide sound reasoning and allow for impartial questioning amongst those who may not be so firm of mind.

The Tenth Man’s job is to challenge conventional and received wisdom. 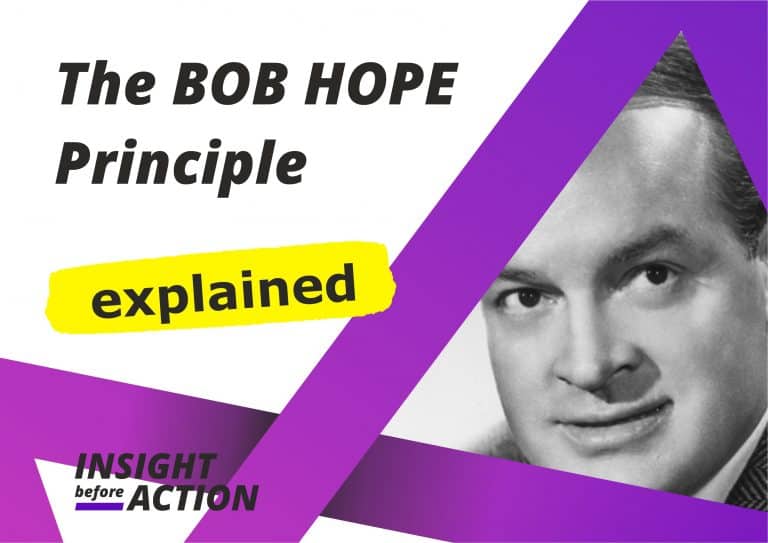 Some of you may or may not have heard of Bob Hope principle. Or even the man. Let me enlighten you. He was an American comedian who never wrote a joke in his life. For years he had a successful career and was regarded as one of the finest comedians of his time. How I…

No comments to show.